The International Monetary Fund (IMF) is readying a proposal on the creation of an international carbon floor price arrangement that complements the Paris agreement in preparation for the United Nations’ 26th annual climate change conference (COP 26) to be held in November.

The setting of an international carbon floor price aims to address the current gap between the existing low carbon pricing levels and those at which they should be to achieve the carbon reduction targets set in the Paris agreement. There is currently a proliferation of carbon pricing schemes in more than 60 countries, with a pair of key pricing initiatives launched just this year in China and Germany.

The IMF’s proposal is contained in a paper that is still under discussion by its board and membership, according to Vito Gaspar, director of the IMF’s fiscal affairs department, and Ian Parry, principal environmental policy expert in the same department, in an IMF blog post published on June 18 2021.

Although some countries are moving ahead aggressively on carbon pricing, the ambition to set carbon pricing varies from country to country such that four-fifths of global emissions remain unpriced, the IMF notes; and the current global average emissions price is only US$3 per metric ton.

“Carbon prices remain substantially lower than those needed to act as an incentive to meet the goals of the Paris agreement,” says Lucien Peppelenbos, a Robeco climate strategist, in a separate study published on April 26 2021. “The average global carbon price of US$2 per [metric] ton is far too low and only 22% of global greenhouse gas emissions are priced.”

Peppelenbos' statement is consistent with the conclusions of the World Bank’s State and Trends of Carbon Pricing report, published in June 2019, which argued that a carbon price range of US$40 to US$80 per metric ton was necessary by 2020 to reach the goals set by the 2015 Paris agreement. The report added that as countries try to limit the average global temperature increase to 2 degrees Celsius, average carbon prices could increase more than sevenfold to US$120 per metric ton by 2030.

“As a knock-on effect, some countries and regions with high or rising carbon prices are considering placing charges on the carbon content of imports from places without similar schemes,” say Gaspar and Parry. “From a global climate perspective, however, such border carbon adjustments are insufficient instruments as carbon embodied in trade flows is typically less than 10% of countries’ total emissions.”

Although there is near-universal participation in the Paris agreement, the absence of a global policy or standard on carbon pricing remains a challenge to meeting the carbon reduction targets set in the agreement.

The IMF proposal will argue for the creation of an international carbon price floor arrangement that complements the Paris agreement. The arrangement, according to the IMF, should be launched by the largest emitters, namely China, India, the US and Europe, which together will account for two-thirds of global carbon emissions by 2030. And the arrangement should be anchored on a minimum carbon price that is an efficient, concrete, and easily understood policy instrument. 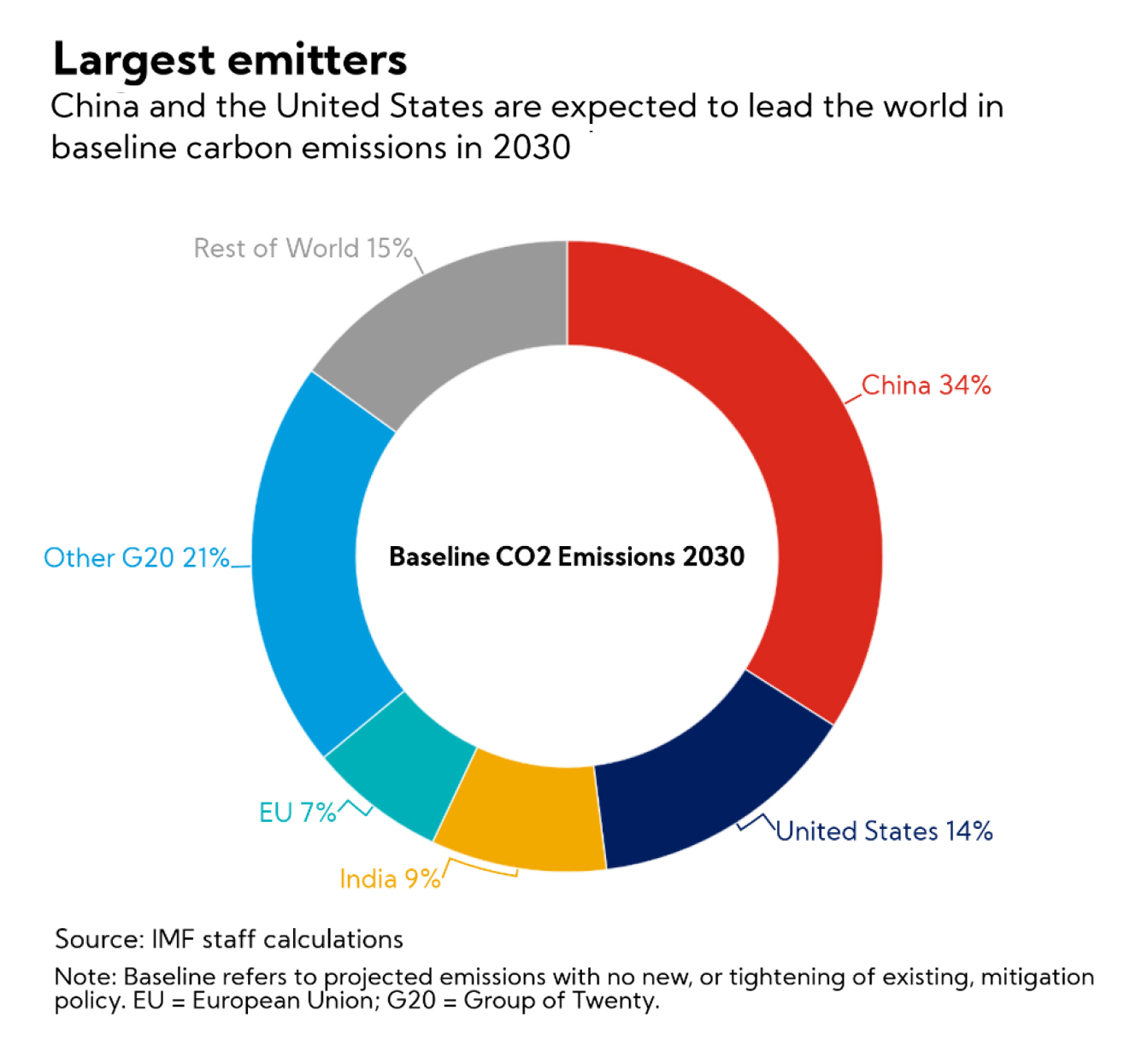 “Simultaneous action among large emitters to scale up carbon pricing would deliver collective action against climate change while decisively addressing competitiveness concerns,” Gaspar and Parry state. “The focus on a minimum carbon price parallels the current discussion on a minimum for the tax rate in international corporate taxation. More broadly, international harmonization through tax rate floors has a long tradition in Europe.”

The proposed arrangement needs to be equitable, flexible, and account for the differentiated responsibilities of countries given, among other factors, historical emissions and development levels, the IMF argues.

“One way to do this is to have, say, two or three different price levels in the agreement that vary according to accepted measures of a country’s development,” Gaspar and Parry posit. “The arrangement could also accommodate countries where carbon pricing is not currently feasible for domestic political reasons, so long as they achieve equivalent emissions reductions through other policy instruments.”

“There is no time to waste in putting in place such an arrangement,” the pair contend. “Imagine us in 2030. Let us make sure that we will not look back at 2021 just to regret the missed opportunity for effective action. Let us instead look back with pride at global progress towards keeping global warming below the 2-degree-Celsius threshold. We need coordinated action now—and it should be centred on an international carbon price floor.”

Carbon pricing is a tax or fee on the amount of carbon dioxide (CO2) produced by a company. Set by governments or markets, carbon prices cover a part of a country’s total emissions, charging C02 emitters for each ton released through a tax or a fee. Those fees, according to S&P Global, may also apply to methane, nitrous oxide and other gases that contribute to rising global temperatures.

Carbon pricing can also be in the form of a cap-and-trade system in which the government sets a cap on the total amount of emissions allowed to a company, and C02 emitters are either given permits or allowances, or must buy the right to emit C02. Companies whose total emissions fall under the cap may choose to sell their unused emission credits to those companies that surpass their carbon allotment.

Have you also read?
Will China kick its coal habit?
Pushing the line on diversity disclosure
Europe’s green unilateralism
Calamities push urgency of solutions from COP26
A climate agenda for the G20