Fintech companies in Asia-Pacific attracted US$11.6 billion across 565 deals from venture capital, private equity, and mergers and acquisitions in 2020, compared with US$16.8 billion in 2019, reaching a six-year low, as the pandemic saw a decline in investment into emerging markets like Southeast Asia.

Global fintech funding reached US$105 billion in 2020, the third highest on record despite a 36% drop from US$165 billion in 2019, according to KPMG’s latest Pulse of Fintech report.

Investment in China also fell to US$1.6 billion, from US$4.8 billion in 2019, reflecting the significant maturity of the country’s fintech sector, particularly in the payments space which is dominated by a small number of tech giants.

After Jakarta-based multi-service platform Gojek raised US$3 billion in the first quarter of 2020, the increasing uncertainty created by the pandemic drove a large amount of investment away from emerging markets like Southeast Asia, particularly in the second half of the year.

Nevertheless, the payments space showed the most regional resilience. After the global pandemic brought many deals to a halt in the first half of 2020, the trend was reversed in the second half as investors and fintechs adapted to the new environment.

Andrew Huang, partner and fintech leader at KPMG China, says: “In China, we are seeing growth in a number of emerging fintech sectors, including blockchain, regtech and wealth management. One big change we have seen in 2020 has been the focus of these fintechs, with many now focusing their efforts on empowering traditional financial institutions rather than providing direct to consumer products.”

Insurtech continued to gain traction among investors in China. In the second half of 2020, Shuidi, a crowdfunding platform which focuses on medical expenses, raised US$380 million in two funding rounds.

The digital transformation of the country’s insurance industry is being driven by the central government, insurance companies and technology companies alike. As a result, insurance service providers are likely to see structural reform continue, with more emphasis placed on innovative ways to prevent risks, KPMG says.

As mainland China forged ahead with real-world testing of its central bank digital currency, other countries began to evaluate their options, including the Federal Reserve, the European Central Bank, and the Bank of England.

In the second half, Chinese government and regulatory bodies issued multiple draft and final announcements, which have implications for fintech investments in the country. These include interest rate caps, anti-trust provisions, data privacy restrictions, amended capital requirements for online lenders, and loan size caps.

These measures contributed to the deferment of Ant Financial’s highly anticipated initial public offering, and a “wait and see” approach to fintech investment activity, the report says. 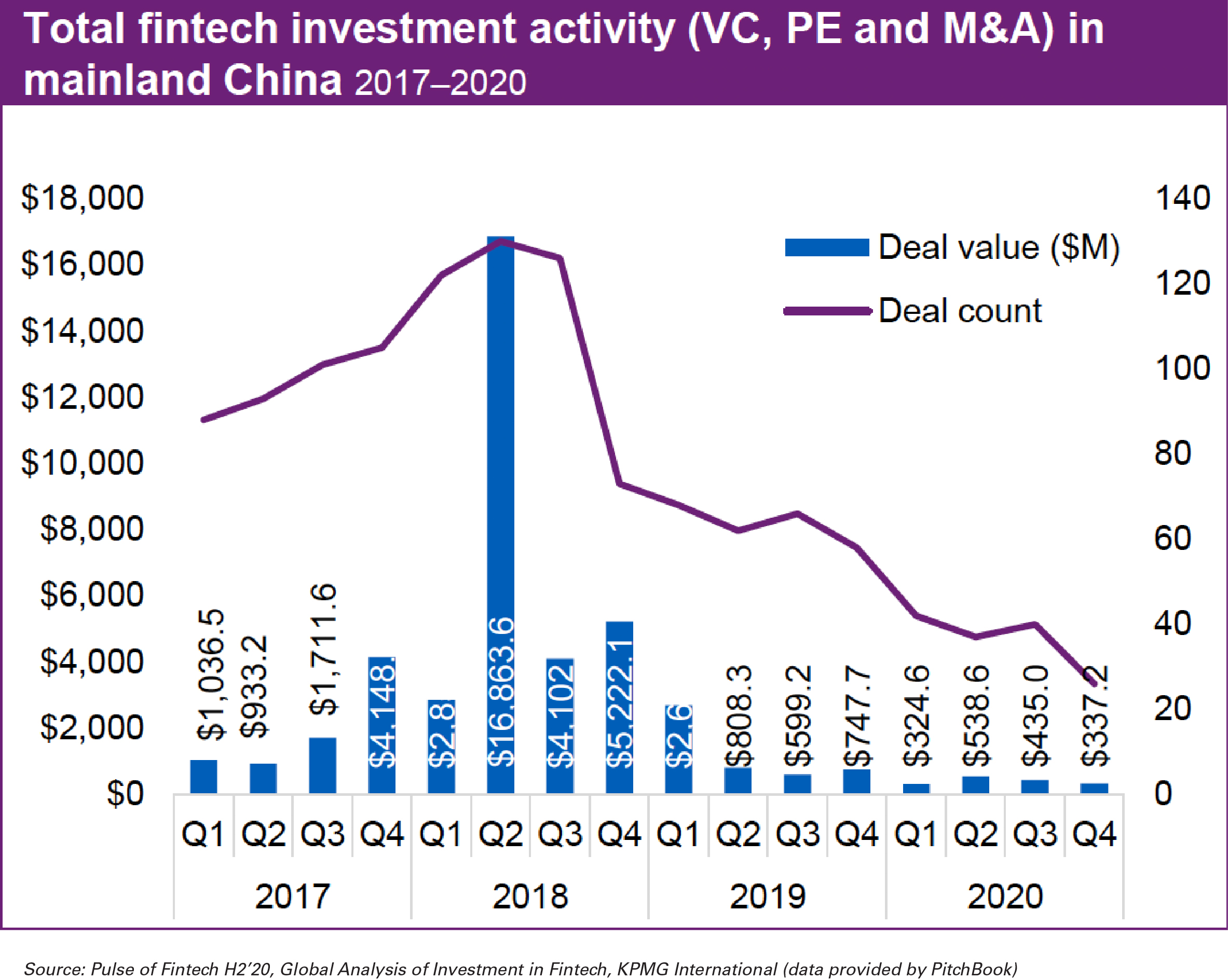 Barnaby Robson, partner, deal advisory, at KPMG China, says the stock-market valuations for tech companies have risen during the pandemic era. “Shareholders of privately owned fintech groups recognize there is a window to list at excellent valuations, and we expect significant IPO activity in 2021/22,” he adds.

In Hong Kong, a majority of the eight digital banks licensed in the city launched services over the course of 2020. While their impact will take time to understand, these online lenders have already driven incumbent banks in the city to up their game in terms of apps, user interface, products and services, the report says.

The city’s technology IPO market was also robust in 2020, while unicorn fintechs are increasingly considering going public given the recent successes and valuations achieved by unicorn companies.

Have you also read?
Reshaping traditional practices under the new normal
Biden must fix the future, not the past
Meitu boosts cryptocurrency holdings to US$100 million
Deutsche Bank names Indonesia securities services head
Covid-19 still a drag on Asia-Pacific issuers